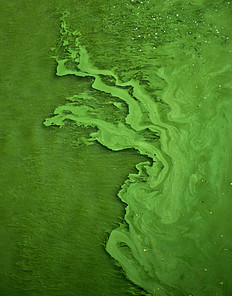 Algae biofuel, as a renewable alternative to fossil fuels, consists of algae in their natural state. They are typically rich in lipids (oil), which can be extracted and converted into biodiesel and used directly by most diesel engines without modification and with smaller changes than petroleum-based fuel.  More advanced conversion techniques produce ethanol for use in gasoline engines or hydrocarbon gas for use in hydrogen fuel cells as well as other chemicals that can be used directly or further refined for industrial processes.

Pros of using Algae as a Biofuel

Being non-food sources that grow very quickly, algae seem to offer solutions to the problems associated with food versus fuel debates such as degradation of arable land and rising food prices.  These advantages can be further leveraged with cultivation in fertile aquaculture ponds.

Algae can possibly make a sustainable transportation fuel, as they grow quickly and require little attention or resources for growth. Coming from non-edible sources, algae fuels have the added benefit of not competing with food production for fertile land, water, or fertilizer. Algae cultivation also requires much less concern over issues such as genetic modification than some other biofuel crops. Algae are full of lipids that contain almost twice the amount of energy by weight compared to carbohydrates like corn (even converting these fuels into ethanol). In addition,  if produced on a large scale,  they could reduce greenhouse gases by absorbing  CO2. Algae also naturally control the level of nutrients in bodies of water while growing.

Since algae require CO2 and sunlight for photosynthesis but cannot survive continuously in water at low temperatures (below 10 °C), they can be cultivated outdoors year-round with consistently high yields, even in cold areas like Canada. A recent study found that genetically modifying algae to produce more oil resulted in increased productivity by up to 40%. Because algae can be grown directly from CO2, it has been suggested as a method to remove greenhouse gases from the atmosphere by simply growing it and eating it.  These capabilities,  along with its impressive rates of growth and high efficiency at converting sunlight to biomass make it an excellent candidate for commercial use as well as further research into biofuel production.

A synbio approach to algae biofuels would be the creation of artificial algae by genome editing that could grow in places where regular algae cannot grow (such as deserts or Antarctica), and thus make it much more cost-effective and economically feasible. Synthetic biology techniques have been used to create new microorganisms that are ideal for producing specific chemicals such as proteins, enzymes, vitamins, or pharmaceuticals without using feedstock from natural organisms.

Commercialization of using algae as a biofuel

The ability to create multiple varieties of algae strains would make it easier for commercial purposes because various strains with varying characteristics could be grown and harvested resulting in more sustainable production. These techniques are being used to create yeasts, bacteria, and other microorganisms that produce biodiesel and ethanol.  Synbio algae have been created that can produce high amounts of lipids compared to existing wild-type algae.

This technology is still in its early stages though so regulations may not yet exist as there currently isn’t a big enough demand for this type of product yet. Although the compounds in algae can be synthesized by artificial organisms,  the most commercially practical method would still involve growing the algae and harvesting them for biofuels.

The main problems with algae are that it requires much more of the carbon substrate than land plants, in addition to being exposed to high levels of sunlight which inhibits longer-term growth. These can be overcome by growing them indoors under artificial lights, or outside during the summer months when natural light is sufficient. Another potentially huge problem is that wild strains are typically unharvestable because they grow fast enough (as fast as several centimeters per hour) to escape capture by conventional fishing methods.  It is, therefore, possible that wild strains could cause unwanted competition with fisheries, although this is dependent on how they are grown and whether they can be harvested before escaping into the ocean or lakes.

The excellent growth rates of algae are not problematic in controlled environments like indoor systems.  Additionally,  algae are harvestable at a much earlier stage than land plants because it grows at an exponential rate and produces more oil as it gets older. This is also beneficial to producers because the demand for biofuels could increase over time and most of the hard work would be done by algae by then.

Algae have been used as a source of food for humans and animals before.  It was discovered that some species of algae contained high amounts of omega-3 fatty acids, which made them attractive to potential users.   Omega-3s can help lower the level of triglycerides in the blood as well as a  risk factor for heart disease and other health-related conditions.

Other commercial uses of Algae

Algae could be used for a variety of purposes besides biofuels, including animal feed, cosmetics, food coloring, nutritional supplements, and even medical treatments. Its high beriberi-preventing Vitamin B content makes it an attractive target for medical use because of its high production potential compared to land plants and animals. Based on this information, algae is a promising alternative that can be utilized now in addition to research into producing biofuels from them. 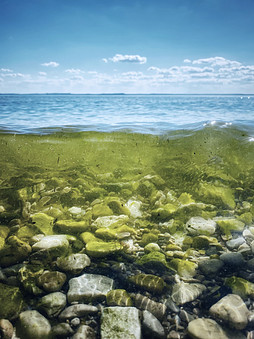 The primary limitation is the fact that algae require a  large amount of light and carbon substrate for production compared to other common biofuel sources. This limitation could be overcome by increasing the number of algae in a given area, or by growing them indoors under artificial lights, although there are drawbacks to each option that should be taken into consideration. Growing them outdoors during the summer months when natural light is sufficient would also work well as they could still be harvested before escaping into lakes and oceans.

The cost of production for algae is much cheaper than that for any other type of biofuel.

This is a result of the high quantity of oil produced by algae,  which can be as much as 20x higher than land plants such as corn and soybeans per unit area due to its rapid growth rate.

Algae could also be harvested and processed more quickly than land plants because they grow faster and are crunchier/have a higher cell wall content. This is beneficial to producers because it saves costs on production, although consumers would have to wait for delivery.

As algae grow with sunlight, they may compete with fisheries for natural resources from the ocean or lakes. On the other hand, many fish species rely on algae as their primary food source, meaning that this could actually benefit them by increasing the number of nutrients in the water which enhances water quality and stimulates the growth of aquatic organisms like fish. The negatives to increasing nutrient levels in water include increased algal growth and the degradation of water quality over time with prolonged runoff from land and farming activities. One benefit to increased algal growth, however, is the fact that it could help remove excess nutrients from wastewater caused by human activity in addition to adding a healthy amount of omega-3s to people’s diets.

Future outlook of Algae Based Biofuel

The future of algae as a source for biofuels will be determined by our ability to overcome their limitations and fully utilize this promising organism without harming ecosystems or competing for natural resources with humans and animals. Check out more about whether biofuels are a sustainable source of energy.