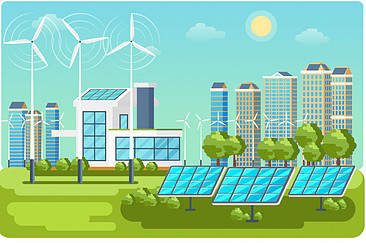 When it comes to climate change, there are a lot of proposed solutions floating around. But one that seems to be gaining more traction lately is the idea of transitioning to renewable energy sources. Solar, wind, and hydro power are all cleaner alternatives to fossil fuels, and could help reduce our carbon footprint significantly. But are renewables really the answer to climate change? Let’s take a closer look.

The burning of fossil fuels has had a considerable, and largely negative, effect on the global environment. It is estimated that the accumulation of greenhouse gases resulting from the burning of oil, coal, and gas are responsible for upwards of 75% of the rise in global temperatures around the world. In urban areas, these rising temperatures lead to more frequent heat waves, an increase in air pollution, and more smog-filled days. Further still, due to areas around bodies of water heating up faster than other parts of the land mass, coastal areas are seeing more frequent flooding and extreme weather events as high tides become larger and more powerful with each passing year. The effects from renewable sources of energy will take some time before they can start to counteract the damage done by burning fossil fuels.

Renewable energy sources, such as solar and wind power, represent a shift to greener, more sustainable alternatives for powering our homes and businesses. These sources of power rely on natural resources that are constantly replenished, such as the sun’s rays or the wind’s force, rather than finite sources like coal or gas. Not only do these renewable forms of energy help reduce our reliance on these finite resources, but they also have far less of an adverse impact on the environment overall. Both solar and wind farms produce virtually no pollution or hazardous by-products compared to more traditional methods of energy production. Those who invest in renewable energy can feel good knowing they’re helping create a healthier world in many ways.

Solar panels and wind turbines can be expensive to install, but the long-term savings are worth it

The costly upfront cost of installing solar panels and wind turbines can be daunting, but the long-term benefits make it worth the investment. Sustainable energy sources, such as solar and wind, are often cheaper than traditional fossil fuel sources in the long-run. Not to mention that investing in renewable energies is essential for the health of our planet and its inhabitants. Individuals who make these investments into renewable energies will also likely benefit from tax credits, depending on individual state or local laws. In addition to this, some states provide subsidies for those interested in pursuing clean energy options. Ultimately, these investments are not only good financially but could help us all sustainably reduce our environmental footprint and create a healthier planet for people today and generations to come.

Renewable energy is an important topic of discussion in today’s world, in particular with the ever growing environmental concerns and increasing emissions. Renewability of energy sources like wind, solar, geothermal, hydropower and others are renewable technologies that have been advancing towards becoming a more efficient energy source. Although there are many people on board with this change, some remain skeptical about the implementation of renewables due to cost or reliability issues. This skepticism is understandable as large and significant changes can often be quite intimidating. However, with certain technical advancements being made and industry elements improving, renewable energy can become a viable and reasonable option for those against it at present. The potential benefits renewable energy could offer if adopted make such reservations more than worth considering.

There are many ways to make your home more energy-efficient, even if you’re not ready to switch to renewables entirely

Making your home more energy-efficient can be easier than you think. From taking small steps such as simply unplugging electronics and appliances when not in use, to updating switches and outlets with ones that include built in surge protectors, there are plenty of ways to conserve energy. Replacing a traditional heating system with an energy-star certified one can save up to 30% in energy costs over time. The same goes for replacing old or inefficient lighting fixtures or bulbs with shorter lifespan LED equivalents. Furthermore, insulating the water heater, dryer vent and air ducts can reduce energy loss from escaping hot or cold air as well as conserve water usage. Investing into these updates may involve some added expense at first, but the benefits make it well worth it for both your wallet and your environment!

Climate change is a complex issue, and there’s no one perfect solution that will work for everyone

Climate change is a serious problem facing humanity today, and it is essential for people to realize that it will take more than simple solutions to make a dent. Because of the complexities involved in reversing the immense damage done by years of reliance on fossil fuels, the only way to move forward is with an integrated approach that draws from multiple sources of knowledge and expertise. A successful approach will combine technical innovations with efforts to reduce emissions through improved efficiency, increased reliance on renewable energy sources, and an overall shift in behavior towards ways of living which reduce our collective impact on our climate. Only through a holistic effort done on both small and large scales, can we hope to successfully battle climate change.