Climate change is a hot topic among different groups of society and has been highly debated in both business and political circles. However, in the scientific literature, there is a strong consensus that global surface temperatures have increased in recent decades and that trend is caused by human-induced emissions of greenhouse gases. For instance, the National Aeronautics and Space Administration (NASA) shows a graph that captures data collected by different research organizations including NASA that shows global temperatures in an upward trend in the past few decades.

“According to NASA data, 2016 was the warmest year since 1880, continuing a long-term trend of rising global temperatures. The 10 warmest years in the 138-year record all have occurred since 2000, with the four warmest years being the four most recent years. 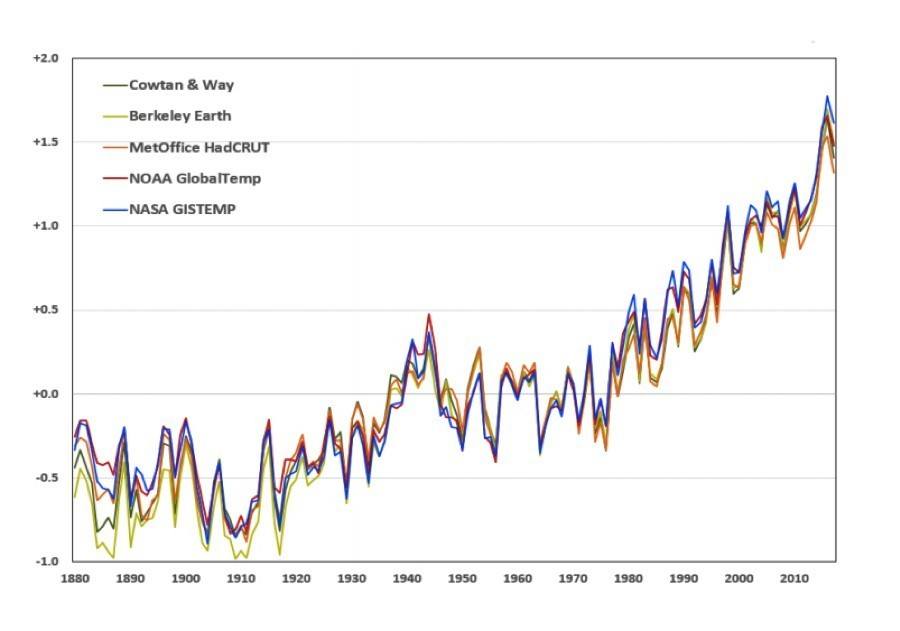 According to NASA, multiple studies published in peer-reviewed scientific journals show that 97% or more of actively publishing climate scientists agree that climate-warming trends over the past century are extremely likely due to human activities while at the same time most of the leading scientific organizations worldwide endorse this position. Among these scientific bodies including the U.S. National Academy of Sciences, American Chemical Society, Intergovernmental Panel on Climate Change, etc

The private sector, government, and non-governmental organizations all have one thing in common, that is they rely on data and information to make informed decisions. As such, it is with anticipation that the best science will inform the ways that decision-makers frame issues, consider solutions, decide on programs, and implement outcomes.

In this regard, the Intergovernmental Panel on Climate Change (IPCC), it is a scientific and intergovernmental body under the auspices of the United Nations set up at the request of member governments, to provide the world with a clear scientific view on the current state of knowledge in climate change and its potential environmental and socioeconomic impacts. The IPCC produces reports that support the United Nations Framework Convention on Climate Change (UNFCCC), which is the main international treaty on climate change.

The IPCC has published several reports on climate change and today (October 8th, 2018), it released one of its most important ClimateChange reports as it calls it, that requires unprecedented changes in society, which will have huge benefits in reversing the trends of climate warming.

One of the main objectives of the Paris Agreement is to strengthen the global response to the threat of climate change by keeping a global temperature rise this century well below 2 degrees Celsius above pre-industrial levels and to pursue efforts to limit the temperature increase even further to 1.5 degrees Celsius.

According to the new IPCC report, through the year 2017, the concentration of greenhouse gases (GHG) emissions in the atmosphere had already warmed the world by one (1) degrees Celsius and it notes that if the average global temperatures rise more than 1.5 degrees Celsius above pre-industrial levels; climate risks to society will increase. These risks include, but not limited to extreme weather, rising sea levels and diminishing Arctic sea ice, etc

Also, the summary for policymakers of IPCC Special Report on Global Warming of 1.5 degrees Celsius approved by governments that were released on October, 8th, 2018 noted that limiting global warming to 1.5 degrees Celsius would require rapid, far-reaching and unprecedented changes in all aspects of society, the IPCC said in a new assessment. With clear benefits to people and natural ecosystems, limiting global warming to 1.5oC compared to 2oC could go hand in hand with ensuring a more sustainable and equitable society.

The new report suggests that Global net human-caused emissions of carbon dioxide (CO2) would need to fall by about 45 percent from 2010 levels by 2030, reaching ‘net zero’ around 2050. This means that any remaining emissions would need to be balanced by removing CO2 from the air.

A shift in energy systems, transport, etc needed to help not exceed 1.5 degrees Celsius: Removal of CO2 from the air is not sustainable.

As such, allowing global temperatures to temporarily exceed or ‘overshoot’ 1.5oC would mean a greater reliance on techniques that remove CO2 from the air to return global temperature to below 1.5oC by 2100. The report points out, the effectiveness of such techniques is unproven at large scale and some may carry significant risks for sustainable development.

The IPCC maps out four pathways to achieve 1.5oC, with different combinations of land use and technological change. Reforestation is essential to all of them as are shifts to electric transport systems and greater adoption of carbon capture technology.

Also, the scientists suggest that keeping global temperatures to 1.5oC has enormous benefits coupled with a shift in energy systems and transport that are needed to achieve it and can be done within the laws of physics and chemistry.

However, IPCC scientists suggest that the final last thing needed to help resolve this global issue is political will. The report will be presented to governments at the UN climate change conference in Poland at the end of this year (2018).