The GHGs primarily come from burning fossil fuels from cars, trucks ships, trains and planes as 90% of the fuel used for transportation is petroleum-based, mainly gasoline and diesel.

On a global scale, the Internal Combustion Engine (ICE) is the largest source of GHGs exceeding 40%. ICE in the transport sector is for propulsion and operation of other equipment in the agriculture, extraction industries, and manufacturing.

ICE has other problems associated with air pollution, increased particulates in the atmosphere in which an electric motor can help to reduce. However, switching from ICE to electric motors will take a long time because of price among other technological barriers such as the concern that EVs do not have the range and refueling of fossil powered vehicles is easy and faster than recharging an EV. Investors are also reluctant to invest in existing EV technology since a more advanced technology will be available in 2-3 years.

We see the EV technology is still in the nascent stage, and a few barriers exist before this technology can go mainstream. The main obstacle seems to be the high initial cost of EVs, and thus achieving price parity with the fossil-fuelled vehicle is needed before the massive deployment of the technology takes place.

There are also new entrants in the market, such as Rivian will introduce pickup trucks designed for on-road and off-road driving. Rivian intends to launch an all-electric five-passenger pickup truck in 2020 and a seven-passenger SUV after that. Rivian claims these vehicles will deliver between 200 and 400 miles of range.

In comparison with V-6 or V-8 engine used for most Internal Combustion Engine (ICE) engines in truck pickups, Rivian claims it will provide R1T powered by a quad-motor system that sends 147kW and torque control to each wheel. Rivian plans to have three battery options, including a 135kWh (300 miles range), 180kWh (400 miles range) and 105kWh (230 miles range). 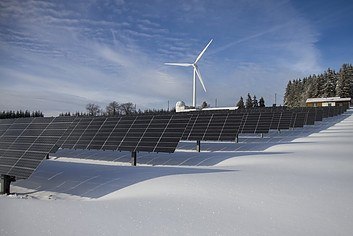 Is solar PV good for EVs?

Since EVs are powered by electricity and support switching from fossils-fuels (Internal Combustion Engines) to electric motors for cars, pickup trucks and other modes of transportation, solar PV comes in handy to power your vehicle with solar energy.

For instance, when it comes to air transport, already Solar Impulse 2 – a solar-powered plane showcased the potential of renewable energy (solar PV) to power planes and completed the first round-the-world flight using solar power. The aircraft had a wingspan more full than Boeing 747 and flew more than 40,000 kilometers without fuel, and had more than 17,000 solar cells on its wings and spent 23 days in the air.

When it comes to EVs, solar PV will play a significant part in the EV recharging infrastructure. Using solar PV will be like using free energy to power an EV for solar-powered homes and businesses.

Solar panels once paid off at 5 to 10 years depending on federal and state incentives, and you will be able to use free energy from the sun after solar panels have paid themselves. Owners of solar-powered homes and businesses will save money since using EVs powered with solar power will save the grid lots of energy created by an extra demand from EVs.

Also, having a rapid penetration of EV charging stations will put a strain on the grid and hence having solar-powered EV infrastructure could help solve grid stability issues. Learn more about pros and cons of electric vehicles.

If you are an EV owner, you could determine how much you could save in terms of fuel usage avoidance, going solar and return on investment from using solar panels to power your vehicle and home or business. Start by using this solar panel cost calculator from the EnergySage.