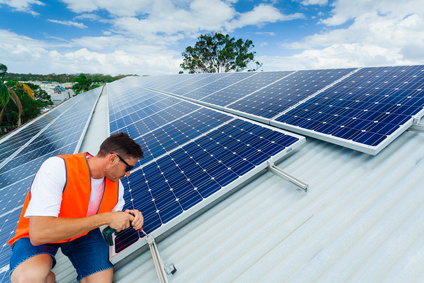 A lot of people want the answer to the following question: how much does it cost to go solar? When some people think about getting solar power personally, they never get past this question. It should be noted that solar power hasn’t been a marginal source of energy for a long time now. Throughout 2016 alone, the rate of solar panel installations nearly doubled. However, people still need the answer to the question: how much does it cost to install solar panels? This is actually a hard question to answer for a lot of reasons.

For one thing, the cost of solar panel installation varies so much and according to so many different factors that it is impossible to come up with a simple answer for this question. Even coming up with a price range is difficult. The fact that all technology tends to come down in price over time complicates the matter further. People who couldn’t afford a solar panel twenty year ago can probably afford one now, and in another twenty years, everyone might be able to afford a solar panel.

Solar panels also help to exemplify the old adage: ‘you have to spend money to make money.’ People should try to take into account the fact that the initial installation of solar panels can be expensive, but that doesn’t necessarily mean that the overall system will be equally expensive in the long run. Solar systems produce free energy after the initial installation and purchase, so people should think of them as investments. People should take all of these considerations into account when they answer the question: is solar worth it? Solar panel cost calculators and tools like Google Project Sunroof, Geostellar, and EnergySage can help.

Some people might feel overwhelmed by all of the different factors related to solar power today. It might seem like it’s difficult to really know how much a solar panel is going to cost, especially since there is a lot of misinformation related to solar panels now. Some people are still repeating facts and figures about solar power from the 1970’s, and it can leave people feeling like they’re behind by forty years.

There are lots of different solar panel cost calculators online that will help people get a sense of the initial installation costs of their solar panels. People who are getting fully installed solar systems will have to absorb different initial cost levels.

The type of solar company is a big factor. In the United States, people will also tend to pay different rates depending on the state that they live in for various reasons. Different states will have different solar companies. States will also vary in terms of their climate and the amount of sun exposure that they get in the first place, so their solar power potential will vary. Even the exact location within a state can be a huge deciding factor for the people who are trying to get a sense of the cost of solar panel installation.

The payment method for the installation is a huge factor. Some people will pay cash right away. Others will lease the solar panels, or they will take out loans. This means that they will pay nothing immediately, and they will still tend to save money over a long enough period of time.

Google Project Sunroof takes into account a lot of different local factors, which is the case for all solar panel cost calculators. This tool analyzes the nearby trees, which might block out the sun. It also looks into the local weather, cloud cover, and average sun exposure of the area.

Since around 80 percent of all of the different buildings modeled by Google Project Sunroof have been shown to be viable, the odds are definitely good for most people. It looks like despite a lot of the concerns about whether or not most areas get enough sunlight to justify the inclusion of solar panels, most people really won’t have a problem with that. Anyone who lives in Houston definitely won’t have a problem.

People can use Google Project Sunroof in order to search for their homes in particular. From there, people will learn everything that they need to know using this tool. They will get estimates of how much energy the new solar panels will generate. People will learn about the necessary size of their future solar array.

Most importantly, people will learn about the costs of either buying or leasing this hypothetical new solar system. They can almost literally get all of it mapped out for them using the colorful graphics that have helped to make all Google tools famous. From there, people will have an idea of their future at the same time.

This is a tool that can allow people to quickly get all of the information that they need about their future solar panels. All they have to do is input their address and their average monthly electric bill. After anyone inputs his or her address, an aerial-view image of the area appears onscreen.

It helps to get people in the mood for thinking on a more global level in the first place. After people input a figure for the average monthly electric bill of the household in question, they will be taken to the results very quickly. This tool can also be used for commercial properties, making it very versatile.

One of the first things that people will learn is whether or not they will save any money on their electric bills. In many cases, this is what will happen. They will learn whether or not solar panels have a tendency to work well in their location.

The next step in the process involves getting different solar quotes online, obviating the need to make any phone calls. EnergySage will give people a lot of different options, showing them how much money they will save on their solar panels over the course of the next twenty years or so, assuming that they pay cash, take out loans, or lease the solar panels.

In many cases, over the course of twenty years or so, people will actually save a lot of money. EnergySage is capable of taking into account a wide range of different factors in order to really give people all of the information that they need.

It’s also easier to use than a lot of other solar panel cost calculators. It makes the research process much more fun than it would be otherwise.

Solar panel cost : Is solar worth it?

For these people, the ability to generate free energy for years with solar panels will make a big difference. These solar panels can more or less pay for themselves eventually, but the timetable involved might not be worth it for some people.

Thanks to all of the different solar panel cost calculators, people will not have to worry about coming up with some sort of overarching answer to the question: how much does it cost to install solar panels?

Their answer to that question is going to be different from the answer that someone else will give to it, which is already enough to completely change the equation. Each solar panel cost calculator makes that clear.

The cost of solar panel installation exists within a broad range. People usually won’t pay significantly less than 10,000 dollars in order to install solar panels that can truly meet their energy needs.

Many people will pay between 25,000 and 35,000 dollars for the solar panel installation. There are still different things that people can do in order to bring down all of the associated costs. These costs will also change with time, which has been the case over and over again.

However, between the initial costs of the solar panels and the fact that solar panels pay for themselves, the cost of solar panels is often negative over time.

As long as people stay in a location for a while and they keep on generating electricity with their new solar panels in a location that gets enough sun, they will tend to save tens of thousands of dollars over the course of twenty years or so.

The people who don’t pay anything up front due to loans or leasing will still save money over the course of twenty years or so. However, they won’t save as much as the people who decide to pay in cash initially. These people will still tend to break even eventually, and they will start to save money at another point.