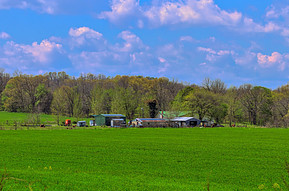 Individuals and businesses interested to harness solar energy from the sun usually buy these systems to generate electricity for their own use. Since grid connection is limited to feed excess power generated by the stand-alone solar system, batteries are connected to store this power for later use. Common batteries used in this context include lead-acid batteries and lithium-ion batteries.

Pico solar home systems and appliances have the lowest cost and hence are used in low-income households mainly in Sub-Saharan Africa, South Asia, and South-East Asia. They include small portable solar lanterns, flashlights, or lanterns designed to meet lighting needs. Most of these off-grid solutions are promoted by development agencies and governments in providing energy access to usually rural remote communities that do not have access to the grid. Typically, such an off-grid solar systems solution is embedded with a 0.5 to 10.0-Watt solar panel and an internal rechargeable lithium-ion (Li-ion) battery. In addition, it is connected to an energy-efficient lighting system using LED lights while some models would also include a USB charging port for mobile phones.

Learn more about off-grid solar systems by vising this web page that explains the end-use applications of solar energy.