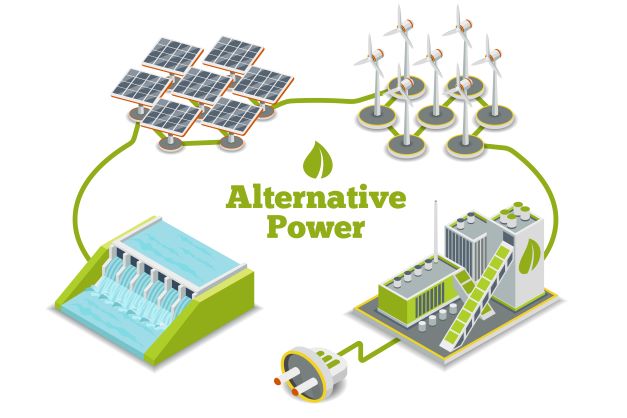 The world is currently facing an energy crisis. Climate change, caused primarily by the burning of fossil fuels, is causing devastating natural disasters and threatening the planet’s ecosystems. In order to combat this, many countries have set ambitious renewable energy targets to reduce their dependence on fossil fuels and minimize their carbon footprint.

One of the most popular and effective forms of renewable energy is solar power. Solar panels, made of silicon, convert the energy from the sun into electricity. This energy can then be used to power homes, businesses, and even entire communities. The cost of solar panels has been decreasing in recent years, making them more accessible to the average consumer. Additionally, advances in battery technology have made it possible to store the energy produced by solar panels, allowing for a more consistent power supply.

Another popular form of renewable energy is wind power. Wind turbines, which can be placed on land or offshore, convert the kinetic energy of the wind into electricity. Like solar power, the cost of wind turbines has been decreasing, making them more accessible to the average consumer. Offshore wind farms, in particular, have the potential to produce a significant amount of energy, as winds tend to be stronger over the ocean.

Hydropower is another form of renewable energy that has been used for centuries. It involves using the energy from falling water to generate electricity. This can be done through the use of dams, which can be built on rivers to create hydroelectric power plants. These power plants can generate a significant amount of energy, and can also be used to control flooding and provide irrigation for agriculture.

While renewable energy is becoming more popular, it still only accounts for a small portion of the world’s energy mix. In order to achieve 100% renewable energy, significant investments in research and development, as well as infrastructure, will be needed. In addition, governments will need to provide incentives for individuals and businesses to invest in renewable energy.

Another challenge is the reliability of renewable energy sources. Solar and wind power are weather-dependent, meaning that they may not always produce a consistent amount of energy. This can make it difficult to meet the energy needs of a community or country.

The transition to renewable energy will not only help to reduce carbon emissions and combat climate change, but it will also create jobs and stimulate economic growth. It is important to note that achieving 100% renewable energy will not happen overnight, it will require a significant effort from governments, businesses, and individuals. The key to success will be collaboration and cooperation among all stakeholders. The world has the technology and resources to achieve 100% renewable energy, it is now up to us to act and make it happen.