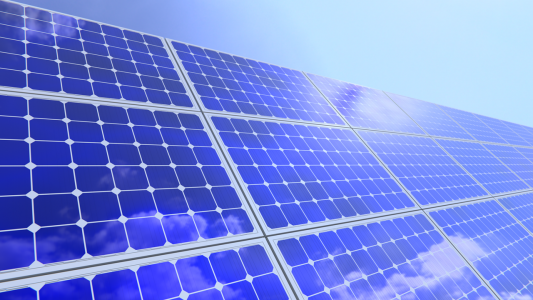 What types of solar panels are there?

Monocrystalline silicon panels are the most efficient solar panels on the market today and they cost more as well, but compared to the other types, they produce more power per square foot of area which makes them a great choice for large scale power generation. Their efficiency range is around 17% to 22%.

Polycrystalline Silicon (a.k.a multicrystalline silicon)
These types of panels are less efficient and more affordable than the monocrystalline ones, but they work great for use with systems that produce lower power outputs because they can be made larger and they last at least twice as long as the mono types.
Amorphous Silicon (a.k.a thin film)
This type of solar panel is not actually a single type, because there are several different types in this class, but the most commonly used ones when it comes to residential applications are Cadmium Telluride (CdTe) and Copper Indium Gallium Selenide (or just “CIGS”). These are by far the least efficient of all solar panels on the market, but they are also very cheap to produce.
How much do solar panels cost?
The average price for an 8-Watt monocrystalline solar panel today is around $1.50 per watt, but some can go as high as $5 per watt and depending on the type of installation you use to install them, they can cost as much as $7.20 per watt.
In general, the price for installing a solar panel system is between $1.20 – $2 per watt for an installed system, but that’s only if you already have a way to get the power that the panels produce and it doesn’t include anything else like batteries, backups or service guarantees. If you don’t have these things included in your price and you’re paying retail for them, then the cost can get up to $3 or even $4 per watt for your solar panel system.